I get a fair amount of opportunities to discuss retirement with people.  The opportunities arise because retirement is a topic that interests me and because a lot of my friends and acquaintances are close to retirement or retired.  When we discuss retirement ages, the younger (late-40’s to early-50’s) group tends to think they will retire relatively early (say in the 54-57 range).  The older group tends to be aiming a little later, even up to age 70 to maximize savings and Social Security before hanging up the spurs (or in reality, the PC and Excel…).  My opinion is that the younger group is over-optimistic, primarily because of what health care would cost them for a decade prior to Medicare.  I was not as sure on the older group.

As it turns out, the older group may be overestimating their staying power. smartasset® , in their analysis of data from the US Census Bureau found that 63 is the average retirement age across the US, with state variations (find your state using the link).

A working paper from the Center for Retirement Research at Boston College suggests that 41% of retirees retire earlier than they had planned, with health (fact, we’re getting older and nobody gets out of here alive) and involuntary job loss as the leading factors. 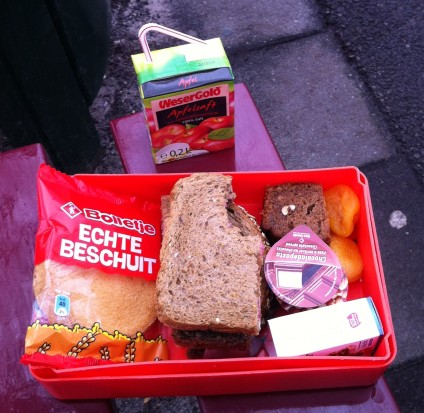 Since at least one of my readers likes pictures, here’s a picture of one of the lunches we enjoyed as part of a Netherlands bike and barge back in 2013.  The cardboard box in the lower right is chocolate sprinkles, which are popular to the point of being a staple in the Netherlands.

I’m not planning to retire at 63

But I was planning to retire at 54!  My original plan, at a large firm covered by a defined benefit plan and retiree healthcare had me retiring at 54.  That plan disappeared in 1999 when I changed jobs.

Now, I’m not planning to retire at 63, but the averages say I might. How do you deal with that uncertainty in your retirement income plan (RIP)?  My RIP has multiple tabs with plans starting immediately and at ages 63, 64, and 65.  Those plans all show how our retirement income would fare at the various ages. Starting earlier leads to lower incomes at higher ages, but sometimes you don’t get a choice.

The RIP is serious business, because as you age your ability to improve the nest egg or re-do Social Security will be extremely limited.  Once you retire, you are your own payroll department, unless your only income is Social Security. Since most people will be taking a look at their finances at this time of year because it’s tax season, this would be a good time to review (or create) your RIP, with at least one tab for age 63.

Here’s a link to the RIP template.

Actions you can take include:
-Update or create your personal RIP.  Own it!
-Check yourself – What’s your retirement goal?  How are you tracking toward that?  What is your plan if you have to retire early?
And if you have not seen the “Why you should read this blog…WIIFY” post, it’s here.